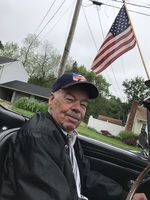 John was born on February 17, 1943 to John and Rita (Ahearn) McLeod in Elizabeth, NJ. He was raised in Winfield Park, where he met his future wife, Rosemarie (Behrens).

Early on, John combined his love of cars and desire to work when he secured an after school job with Bob Miller Rambler as an auto mechanic. He also followed in the family tradition of service, and joined his father and future father in law as a member of the Winfield Park Volunteer Fire Department and Ambulance Squad at age 16. With plans for a wedding followed by a big family, John began his professional career as a Computer Field Engineer for National Cash Register in 1962. He retired after a 40 year career, but continued to freelance in computer repair and was the go-to guy for all things computer related for his family and friends. Needing more room for the expanding family, John and Rosemarie moved the family to Vernon in 1976 and made a home in Lake Glenwood where he was able to enjoy riding his motorcycle and sailing on the lake. John was an active member of the community, he coached his daughters' softball teams, served on the Homeowner's Association board and was a very visible member of the Wanderers Car Club. It was with the Wanderers that he was able to display his love of antique cars. He could be found with his dark green '66 Mustang Convertible at the Chatterbox, Jumboland, the Farm and Horse Show, or driving in multiple local parades, including the Sussex County Fireman’s Parade, and the annual Memorial Day Parade in Vernon, in which he drove, first with his youngest daughter and then in more recent years, with his youngest grandson. John was the creator of the great New Years Eve family tradition which came to be known as “Times Square in the Country”, where he rigged up a ball drop from the 2nd floor deck of the family house. Family and friends have been ringing in the New Year from the road for 43 years!

John loved his family above all else. When people found that he was the father of 5 daughters, they often said, “five girls?”, “no sons?”, “you poor guy” or similar words, but John just smiled back with that ever present twinkle in his eyes and conveyed that he had been dealt the best hand ever possible! He was so very proud of his daughters, his wife, and their grandchildren.

He was preceded in death by his parents, his brother Eugene O’Brien, and his son-in-law Jeff Jenkins.

As we hold a private family service, with a celebration of life to be held at a later time, we will shift our thoughts from how much we will forever miss our husband, father, grandfather, brother, and friend to our memories of the many lessons he taught us, the jokes he always had ready for any occasion, and the love he forever showed to those in his life.

In lieu of flowers, the family requests donations in John's name to childrenscancer.org or jdrf.org