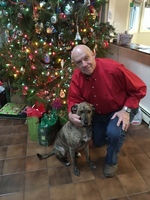 Robert served with the United States Army during the Vietnam War and Desert Storm and served with the Army National Guard for 18 years. He worked as a carpenter for the Carpenters Union for 29 years assisting in the construction of the Meadowlands, he then worked as computer repair technician for Sun Microsystems in Edison, NJ for 30 years and most recently worked as a Plumbing Associate at Lowes in Newton where he also portrayed Santa Claus and was nominated to appear in the National Commercial for Veterans Employed by Lowes and also worked as a Starter and Ranger at Crystal Springs Golf Resort. Robert was a parishioner of St. John Vianney RC Church in Stockholm and a member of the church’s Knights of Columbus. Robert served with the Hardyston Township Planning Board for almost 50 years and was also a member of the Hardyston Fire Department. Robert took great joy in golf, puzzles and collecting model trains and constructing villages for the trains. Robert and his son, Jeffrey restored a 1970 Mustang Convertible together and was best known as an adoring grandfather referred to as the “Tickle Monster”.

The family will receive their friends for a walk through visitation on Sunday, December 27, 2020 from 2-6 PM. As per State Regulations, capacity at any one time will be limited to 50 people. Funeral from the funeral home on Monday, December 28, 2020 at 9 AM. Mass of Christian Burial at St. John Vianney RC Church, Stockholm, NJ at 10 AM. As per State Regulations the church is limited to 50 people for the Mass. Interment to follow at Northern New Jersey Veterans Memorial Cemetery, Sparta, NJ.