To share your memory on the wall of Joseph Mason, sign in using one of the following options:

The son of the late Joseph G. and Lauretta Mason, was born in Paterson on May 15, 1934. He is a graduate of Fairleigh Dickinson Unive... Read More
Joseph Regis Mason, 86, died Sunday, February 21, 2021, peacefully in his sleep, after a long illness.

The son of the late Joseph G. and Lauretta Mason, was born in Paterson on May 15, 1934. He is a graduate of Fairleigh Dickinson University, and attended Georgetown University Law School before deciding to take over his family business. He settled in West Milford in 1964, where he would later raise his family. Joe was the owner/operator of Base Automotive Supply, as a professional/certified speedometer technician for speedometer and tachograph services. He calibrated the speedometers/odometers of police cars, mainly for the entire state of NJ, a portion of NY, and in 1990 expanding the business with trucking/bus companies in Hawaii, where he then permanently resided. He would also testify as an expert witness. He was a very bright man, always eager to learn, reading and researching. Although he was a workaholic, he enjoyed the outdoors, everything from swimming, skiing, motorboating, sail boating, ice fishing, and snowmobiling, traveling/vacationing, being around a lot of people and loved to entertain at his home on the lake. What stands out in his later years is, he continuously educated himself about his disease, Parkinson’s. He always wished that one day there would be a cure.

Mr. Mason is survived by his beloved children, Judith Mason, of West Milford, and Rose-Marie Mason-Bednarz and her husband, Stephen, of Hardwick, New Jersey. He was the loving grandfather of Ashley Hopper (Lodema), James Lodema, Jr., Bradley Lodema, Suzanne Bednarz, and Christine Bednarz.

The family would like to thank the many caregivers at Forest Manor during his stay with them.

Donations are being accepted for: Michael J. Fox Foundation. 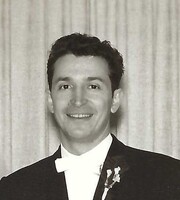