To share your memory on the wall of Richard Schuermann, sign in using one of the following options:

His life started in Neuburger, Germany in 1924 and as a small boy, he lived in the Yorktown area of Manhattan where he attended German school and later Regis High School. He left school to help in his parent’s store and at 19 he was inducted into the Army during WWII. He was an army rifleman and served in the Asiatic Pacific until he was injured in March 1944 during the Solomon Islands Campaign. He was awarded the purple heart along with other medals for his service and was honorably discharged in 1945. He underwent rehabilitation at the Halloran Hospital in Staten Island. There, while undergoing physical therapy he discovered an artistic talent for sculpting and then attended the Art Students League in Manhattan leading to a long professional career as a commercial artist.

In December following his discharge, he married his sweetheart, Elaine Cregan, our mom. She served as a WAC during WWII earning her own honorable discharge. Dick and Elaine were parents to the five of us, Denise, Robert, Neal, Maureen, and Janice. Sadly, we lost Denise in 2019 and Neal many years earlier. As a family we spent years, good times and bad, living in Astoria and then on Long Island where we all grew up. Although times were lean and sometimes rough, there are some treasured memories. Christmas Eve was when dad would go with Robert and Neal, to pick out a beautiful and now much reduced Christmas tree and carry it home for decorating. Vacations were usually family camping trips joined by their friends and their families. Clam digging off the beach in Freeport was always fun.

Somehow troubled times were often just around the corner and conflicts led them to eventually separate. Despite leading separate lives they always kept track of what the other one was up to.

Dad worked for many years in the art department at JC Penney’s where he met and became friends with Ruth who would eventually become his second wife. Together they enjoyed their home in Highland Lakes and another in Florida. Dad and Ruth, a TWA stewardess, travelled the world enjoying adventures. Dad took flying lessons at Sussex Airport and got his pilot’s license, flying to nearby destinations along the east coast. Although Ruth stubbornly declined to be his passenger on these trips, they shared of love of gardening and the lake. Ruth and dad loved to putter around the lake house where dad was always redesigning some aspect of the house, a new porch or patio or more expansive kitchen. Dad would drive Ruth to JFK whenever she departed on a trip. Sadly, it was on a trip to Cairo in 1984 that she died. At 57 her death was unexpected, and dad was shaken by the loss. She was buried near their Highland Lakes home in the Hardyston cemetery.
Dad picked up the pieces and developed a friendship and eventually a romance with Sandra Jane. They spent years courting and then, in 1993 he again married. He spent cold months in Florida and warm ones at the lake, playing poker and golfing and bowling with friends. The years started to make their mark and dad slowed down, and after a hip fracture stopped traveling altogether. Jane’s health also began a decline. After the death of her son Jeremy, she lost her joy for living and she died in 2019 just a few months after our beloved Denise.

Dad insisted on remaining in Florida and with the assistance of home helpers and his kids, he managed to live his remaining days at home. With declining health and failing memory, he nevertheless remembered who his children were and at times had moments of amazing clarity. He asked one of his assistants to help him write letters to his children and in one mentioned he was thinking of a trip to New Jersey for a visit in the coming year.

His family is finally able to come together to celebrate his life and ours and to remember all those who have gone before. We will be celebrating his life at the Ferguson-Vernon Funeral Home, 241 Route 94(1 Vanderhoof Court for GPS), Vernon, NJ on August 18th from 5pm until 8pm. The following day, dad’s birthday, there will be a 10 am Funeral Mass at nearby St Francis de Sales, R.C. Church. The Mass will be followed by a graveside ceremony at the North Hardyston Cemetery. If you can, please join us in this celebration of his life. In lieu of flowers please consider a donation to Feeding America or St. Jude Children’s Research Hospital. Please visit the page set up by the funeral home and add your thoughts and any photographs you might want to share.
Read Less

We encourage you to share your most beloved memories of Richard here, so that the family and other loved ones can always see it. You can upload cherished photographs, or share your favorite stories, and can even comment on those shared by others. 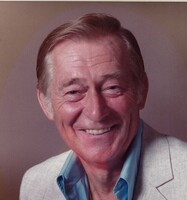