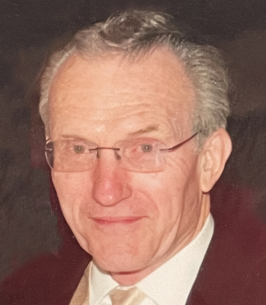 Frederick Schearer Heymann, beloved husband, father, grandfather, and friend, has died. He was 85.

Fred, a,k,a “Freddy” remained at heart, the small-town youth from western, PA. Though born in Easton, like Fred, his father, and eventually moving to NJ as an adult with Habbi, his wife, he never lost hold of his personal ties to Warren, the “quintessential American” town just south of Erie, where he spent his formative years. Growing up an only child, there, Fred enjoyed his mother, Helen’s large, close-knit family, and developed a lasting love of simple pleasures: good conversation, family barbeques, hot dogs, home-made apple pie, ice cream, and baseball. Undoubtedly, for Fred, besides family, friends, and community, it was the little things in life that that mattered most: a kind word, a loving embrace, a hearty meal, and a good joke.

After high school and working several jobs along with his studies to earn his college education, Fred headed off to Grove City College in Grove City, PA. There, he majored in history, made life-long friends, and met Habbi. The couple, introduced on a blind date, married after graduation and spent their early years together in Erie, PA, before moving to The Garden State closer to Habbi’s family. They bought their first house and settled down in Livingston. Fred served time in the military, earned his Masters Degree, pursued an accounting career, and taught night school during the years they raised their family there.

Fred was passionate about sports, exercise and staying active outdoors. He especially loved to play tennis, having learned to play competitively as a teenager and competing in the sport successfully during school. In Livingston, he enjoyed weekend matches with friends. Running was another athletic passion, with early morning jogs and sprints through the neighborhood being a regular pastime. Always striving to maintain good health, he continued to jog and regularly exercise his entire life even to the day he died.

He was also an active member of The Masonic Lodge of Livingston, The Shriners International Organization, and served as secretary/treasurer of The Star-Square Association for many years.

Fred is survived by his wife Habbi, their two children and spouses, Loa (Red), Skip (Maritza), two grandsons, Matthew and Chris, and their beloved Havanese, Misty.

A Celebration of Life will be held in his memory on Wednesday, August 31st at 11:00 AM at the First Presbyterian Church of Franklin located at 11-13 Main Street, Franklin, NJ 07416.

In lieu of flowers memorial donations may be made to The Shriners Hospital for Children.

Like many, Fred loved and cherished music. If he didn’t have it playing in the background, he could often be heard whistling a happy tune. We hope you’ll think of him when you hear one.