To share your memory on the wall of William Demarest, sign in using one of the following options:

Print
Sussex, NJ: William “Bill” Lewis, Demarest, Sr., 74 years old, passed away unexpectedly at home on Saturday, February 20, 2021. Born to Charles and Ina Demarest in Franklin, NJ, he has been a lifelong resident of Sussex, NJ.

Bill graduated from Sussex High School in 1965 and then served with the United States Navy during the Vietnam War and then worked as an assembler for Westwood Fence which later became Tri-State Fence Company in Wantage Twp. Where he worked for 48 retiring in 2011.

We encourage you to share your most beloved memories of William here, so that the family and other loved ones can always see it. You can upload cherished photographs, or share your favorite stories, and can even comment on those shared by others.

Posted Mar 04, 2021 at 10:36am
MaryAnn, Willie and Brian
I'm saddened and very sorry for your loss. I have so many memories of time spent with Bill, going back to when I was just a kid, and he was fresh out of the navy. He was such a good man - honest, kind, intelligent, incredibly hard working, friendly and loyal. He was always a pleasure to be around.
Rest in Peace my friend.
Comment Share
Share via:
BW

Posted Feb 28, 2021 at 11:04am
MaryAnn and Family
Alice just told me about your husband and I send you our prayers and I know how good you cared for him.
Right now my Bill is in Bristol Glenn he stopped walking and is getting therapy there. I guess too much sitting while spending so much time in the house and the snow didn't help. Miss seeing you at ELKS and you reminding me 8 PM to take my pill.

Again I was so sorry to hear about Bill and many prayers for you and your family.
Betty Lou and Bill Walker.

Posted Feb 27, 2021 at 02:49pm
Dear MaryAnn and family, we send our sympathy to all of you. We got to know Bill and MaryAnn in the '70's, when our boys were all in scouts together. That has been many years ago, but Bill will be remembered as kind and dedicated to scouts and the families involved. We have fun times. Sincerely, David & Dee Shepherd
Comment Share
Share via: 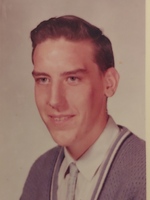